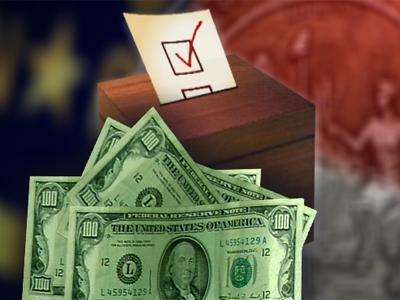 They weren’t alone. Nearly $16 million flowed through North Carolina political accounts over the last six months, despite the fact there are no statewide elections this year and regardless of the state’s very loose partial fundraising ban during the legislative session that’s been ongoing nearly the whole time.

And that’s just state-level races, not the big-dollar federal contests accounted for by a totally separate system. These are donations logged by the State Board of Elections and pulled down Tuesday by WRAL News in databases covering the last reporting period: Jan. 1 through June 30.

There’s always some give in these numbers, but as of Tuesday, WRAL has the total at $15.9 million. Back out the loans that people made to their own campaigns (which get carried on the books in a way that often produces a double count) and the number shrinks to $14.2 million.

Back out everything but the individual contributions to cut the noise of campaign committees swapping money between themselves (i.e., someone gives to a politician, who then gives to a state political party, who then gives to another politician – that gets counted again with each transaction), and that takes you down to $11.3 million.

Total spending in North Carolina politics is less complex, coming in at about $8.6 million over the first six months of 2021.

Again: None of these candidates, with the exception of those running in off-year local elections, are up for re-election until next year, at the earliest.

What else was found going through 200,000 lines of campaign finance spreadsheets?

The contribution cap went up again

People can give North Carolina political campaigns $5,600 per election (including primaries) this year, up from $5,400 last year. That’s because state law ties the cap to inflation, leading to increases every two years.

The increase was based on a 2.8 percent increase in the consumer price index.

The caps have caveats: They don’t apply to state political parties, for example, so people can give unlimited money to the state’s Republican or Democratic parties, which are then free to pass that money along (with no cap) to individual candidate campaigns.

No surprise here, given the aforementioned lack of caps.

The Leadership Committee is an “affiliate committee” in North Carolina campaign finance law, which essentially treats it like a state political party, with no giving limits. It’s another way for donors to support Democratic candidates for Council of State seats. That’s the collection of 10 statewide elected jobs in state government, including the the governor’s office.

Stein ended the period with more than $1 million in the bank, a strong start for the Democrat expected to run for governor in 2024.

Stein’s campaign brought in $876,000 of that money over the last six months, a massive total that includes more than 100 max-out donations of $5,600 each.

Robinson’s a juggernaut, too

Robinson is in his first elected office, but he flirted with a U.S. Senate run this year, and he looks like a strong Republican candidate for governor in three years. This six-month haul left Robinson with about $364,000 on hand.

Robinson had only 20 max-out donors this period, out of 4,080 donations. His average donation is $122. It’s a small-dollar fundraising success that other North Carolina Republicans would love to emulate.

It’s not unheard of for a previously unseen out-of-state donor to drop nearly a quarter million dollars into North Carolina politics.

But it’s noteworthy, especially in an off year with no statewide elections.

Robert Price, who lives in California and founded PriceSmart Inc., gave N.C. Democrats $230,000 in May. It seems to be his second donation ever in North Carolina politics, following a $40,000 donation to the state party last year.

An attempt to reach him for comment wasn’t immediately successful.

No real surprise: Nexus Strategies, the well-known Democratic consulting firm whose clients include Cooper, Stein and Raleigh Mayor Mary-Ann Baldwin, was the No. 1 vendor this period.

The second largest vendor by dollar amount was Baker Hostetler, a national law firm that the state Republican Party paid $215,000 in a pair of outlays, both dated April 1.

The only purpose listed in campaign finance records was “legal fees,” and a party spokeswoman didn’t respond to emails asking for more information. The party spent another $9,423 on legal fees with the firm Ward & Smith.

It’s not unusual for state political parties to spend on outside attorneys, and this could just be clean up from the 2020 election cycle, which featured some litigation and a lot of lawyering as election results were monitored.

But the state GOP’s spending makes up most of the $337,000 that North Carolina political groups at the state level spent on legal fees over the last six months.

Other large spends in this area: $42,830 from the Senate Majority Fund, which backs Republican state Senate candidates, to the firm Brooks Pierce and $31,829 from the state Democratic Party to the firms Wallace & Nordan and Poyner Spruill.

The former lieutenant governor, who lost last year’s gubernatorial race to Cooper, made about $167,500 in charitable donations from his campaign committee over the period.

That’s a little more than half of what his committee spent in the last six months.

Much of the money went to businesses that presumably suffered due to pandemic lock downs, something Forest’s campaign did last year as well. A number of other donations went to charities with a Christian bent.

Forest seems to have stepped away from politics, but his committee ended the period with $257,000 left on hand.

Cooper, who is term limited, ended with about $113,000 in the bank. The $197,000 Cooper’s committee spent over the period went toward traditional campaign costs – consulting and what not. There weren’t any obvious charitable donations.

Also in Forest’s latest filing: A nearly $48,000 payment from a legal settlement.

The money is presumably from the political advertising arm of the State Employees Association of North Carolina, which Forest sued years ago over a 2012 campaign ad that didn’t include enough identifying information to satisfy a since-repealed state law called “stand by your ad.”

The case went all the way to the state Supreme Court, which ruled earlier this year.

There’s at least one other legal settlement in these filings: Democrat J.D. Wooten, who lost a bitter state Senate race last year to Republican Amy Galey (and filed a lawsuit against the Republican Senate Majority Fund over one of its ads) paid $10,000 in January to the Majority Fund.

Dylan Watts, who manages the fund, declined comment other than to say “the matter has been resolved to the mutual satisfaction of all parties.” Wooten didn’t return phone messages.

Baldwin with a war chest

Raleigh’s elections are delayed until next year, but Baldwin raised more than $300,000 over the last six months, making her one of the top 10 fundraisers in the state.

Other max-out donors include attorney Robert Zaytoun, a frequent donor in state politics; Brian Kite and Daniel Alexander Lovenheim of Oak City Group, which owns bars and other establishments; and a handful of donors with ties to real estate groups, including Willa Kane and Michael Smith of Kane Realty Group and Don Walston of Howard, Perry and Walston.

Former state Sen. Sam Searcy, a Democrat who resigned last year right after getting re-elected, closed out his campaign committee this period.

That meant forgiving $381,200 he had personally loaned his election campaign. Indeed, Searcy said, this is a sign that he is fully out of elected politics.

Editor’s note: Most of the information in this post came from sorting through two spreadsheets:

Both of these documents were downloaded from the State Board of Elections, which lets you break down campaign finance figures a number of ways. Instead of pulling an individual campaign’s filings (though this was done in some cases to check cash-on-hand and other figures), we told the State Board of Elections’ system to spit out every donation, and every expense, from the most recent filing period. That produced the two spreadsheets above.

If you’re inclined to hunt through them yourselves, let us know what you find.