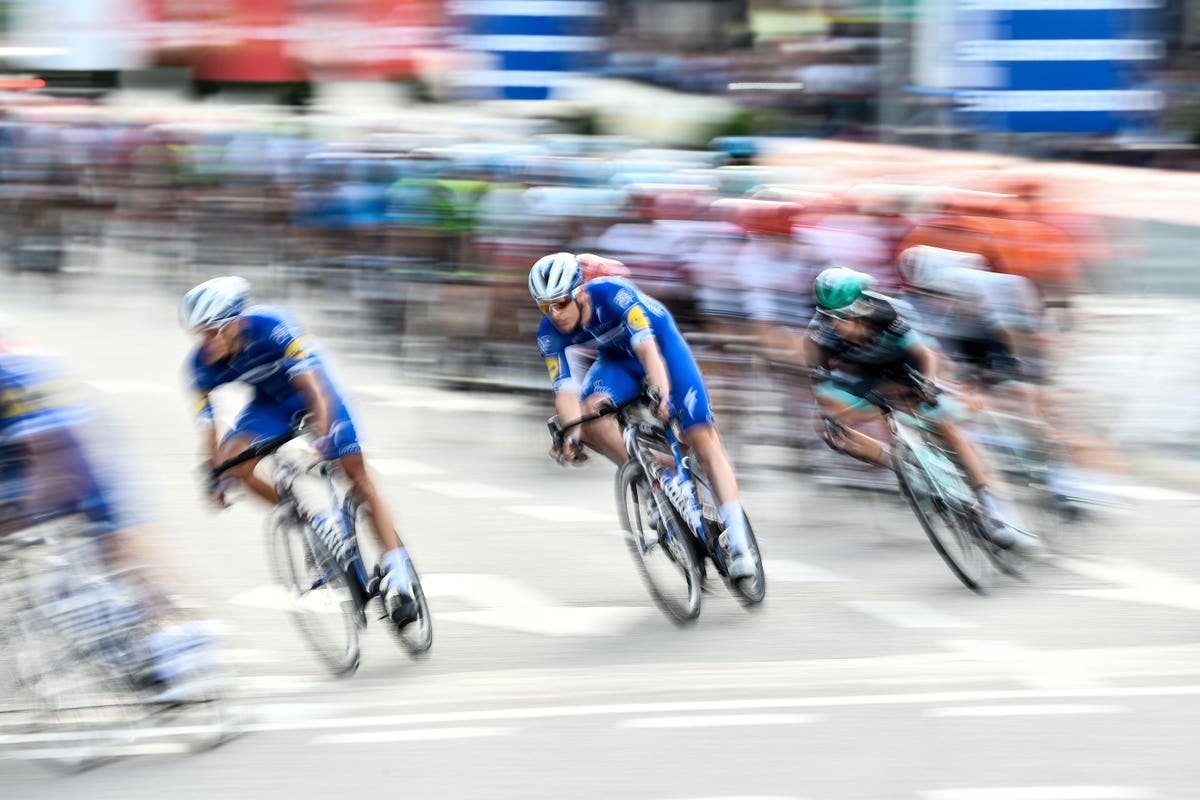 As human beings, we often take for granted how our bodies work. So long as we position our center-of-mass directly over or between our feet, we can easily maintain our balance. When we walk, the force between the bottoms of our feet and the ground upon which we stand propels us forward, and the swinging motion we involuntarily make with our arms helps balance the left-right forces our two feet periodically create. And when we jog, run, or sprint, we’re forced to alter our body mechanics to not only maintain our equilibrium, but to achieve the maximum speeds and most efficient uses of our energy expenditures as possible. No matter how fast you are, however, no human on foot is capable of outpacing that same human being on a bicycle. Why is that the case? That’s what Robert Adler wants to know, writing in to inquire:

“Why can I easily bike a sub-four-minute mile, while I would never be able to run a four-minute mile? Or, more generally, how is it that a bicycle converts my energy output to miles covered so much more efficiently than running?”

There are a few reasons why this is the case, but in order to understand why biking is so much more efficient than running, we have to look at the mechanics and forces at play.

When you’re simply standing on level ground, there are only two forces at play on your body that matter: the gravitational force, which pulls you “down” towards the center of the Earth with a force that’s proportional to your mass, and the force from the ground, which pushes back up on you with an equal-and-opposite force. In physics, we call this force from the ground — i.e., the force that keeps you from falling through the Earth — the normal force, since the force is always normal (or perpendicular) to the ground. This is why it’s so much more difficult to balance yourself on severely inclined terrain as compared to flat ground.

If you were composed of dark matter or neutrinos, rather than atoms, you’d simply pass right through the Earth, as there would be no normal force exerted to oppose the force of gravity. As it stands, or rather, as you stand, the force of gravity is spread out all over your body, while the normal, upward force acts only on your feet. The simplest way to test and feel this is, while standing upright, to simply begin leaning forward. As soon as your center of mass, located somewhere in your abdominal area, is horizontally located ahead of your toes, you’ll be unable to maintain your current position any longer. Either you’ll have to take a step forward to keep your balance, or you’ll simply topple right over.

To come up with the answer, it helps to remember Newton’s laws of motion, and in particular the second and third laws. The second law tells us the only way to change an object’s motion, i.e., to cause it to accelerate, is to apply an external force to it. When you do, the object will accelerate dependent on the force applied and the object’s mass, related through the equation F = ma. And wherever that force comes from, the third law tells us that there’s an equal and opposite force acting back on whatever’s pushing our object: for every action, there’s an equal and opposite reaction.

Of course, whether you walk, jog, or run, it’s not possible to simply push forward, exclusively, against the ground. If you want to propel yourself forward, you simultaneously have to push downward with your foot, and that causes you to accelerate not only in the forward (horizontal) direction, but in the upward (vertical) direction as well.

This simple fact, believe it or not, is the root of a tremendous inefficiency in human, bipedal motion. If you were to track the motion of your center of mass — again, whether you walked, jogged, or ran — you’d find that it consistently rises up-and-down with every step. When your foot hits the ground mid-stride and begins pushing you forward, that’s when your center-of-mass is at its lowest point; when the ball of your rear foot is the only thing touching the ground, or just a little bit after, your center-of-mass is typically at its highest point. The up-and-down motion that we make when we propel ourselves forward while moving as bipedal animals is a tremendous inefficiency.

If you wanted to move as fast as possible — running at a full sprint, for example — there are a specific set of techniques you can employ.

Two pieces of technology can dramatically alter your running efficiency: your footwear, and the give, or “bounciness,” of the surface that you run on. In order to generate the greatest amount of forward force possible, you’ll want the greatest amount of static friction — the “grippy” kind of friction, rather than the “slidey” kind — between your shoes and the ground. Additionally, because of the mechanics of human bodies, a track that has a certain, finite stiffness to it, like a spring, will be optimally suited to human runners if it’s neither too low nor too high.

Does that mean you should simply invest in running shoes that have the “grippiest” tread on their soles? Not quite. There’s a way to get even greater amounts of friction than with flat-or-grooved soles with a very high coefficient of static friction: to wear shoes with spikes on them.

Shoes with long, numerous spikes will maximize their coefficients of static friction between your shoes and the ground/track, enabling the wearer to not only reach high speeds, but to hit their top speed incredibly quickly. If you notice — and you’ll have the opportunity this summer during the Olympics — that runners in different distance races are wearing different types of spikes, that’s to be expected. Fewer numbers of long spikes will enable the wearer to still hit their top speed, but will do so more slowly, hence they don’t need quite as much friction.

As you get to middle and longer distance events, you’ll see that the spikes get even smaller and fewer in number; for races beyond lengths of 1 mile (about 1600 meters), it’s rare to see spikes of any type implemented.

Even with optimal form, optimal physiology, optimal shoes/spikes, and optimal track conditions — even if you were to remove air resistance entirely or aid the runner with a tailwind — the fastest a human is capable of running top out, even over the shortest sprint distances, at around 10 meters-per-second on average. (The record for highest instantaneous speed for a human runner belongs to Usain Bolt, who hit 12.4 m/s, or about 44.7 km/hr, or 27.8 mi/hr at his fastest.)

So what is it, then, that makes cycling so much more efficient, when it comes to turning the energy we output as human beings, into forward motion?

There are a few factors at play that you might think to credit. One is that bicycles have wheels, and the wheel-and-axle system is far more efficient than relying on human joints for motion. Another is that modern bicycles have gears, and by employing various gear differential ratios, you can control the efficiency at which you turn energy into motion. Still another is that there’s extremely little up-and-down motion that occurs when you ride a bike, particularly compared to running or walking. And one more is that, in a crouched position on a bike, you can obtain a much more aerodynamic shape than you can when running, which requires a mostly upright position.

But which of these factors, if any, is the most important in allowing bicycles to obtain such dominant speeds over running or walking?

The answer, perhaps surprisingly, is the wasteful “up-and-down” motion of walking. There’s a little more to the story than merely that, but of the above explanations, that inefficiency comes closest to being correct.

The dominant factor is simply the principle of mechanical advantage: a greater fraction of your expended energy goes into propelling you forward — creating a force in the direction of motion — when you bicycle than when you walk. When you walk, jog, or run, you expend energy to move all the different parts of your body: your arms, legs, torso, etc., in both the horizontal and vertical directions. When you’re simply walking, your body behaves in a manner that’s about ~33% efficient; when you run, you go faster, but your efficiency drops to around ~20%.

On a bicycle, however, particularly if your feet are strapped into the pedals and you travel at high speeds, it’s possible to achieve efficiencies of significantly over ~90%. For the same energy (roughly ~60 W) you expend walking at a slow pace — 5 kph (3 mph) — you can travel about three times as fast on a bicycle.

Let’s compare what happens between the two scenarios.

Being a bipedal animal is actually tremendously disadvantageous as far as speed goes; the one evolutionary advantage we have over animals like gazelles, cheetahs, and lions is endurance. We might not be able to sprint as fast as the fastest animals, but rather we evolved to be distance runners, enabling us to run down and catch much faster prey even without advanced hunting tools.

Very few of us will ever be able to run a 4-minute mile, but almost all of us who are relatively healthy and not yet elderly or infirm can cover a mile in under that time on a bicycle. Although cycling and running both leverage the same major muscles and organs — our leg muscles for power, our heart and lungs for pumping oxygenated blood to those muscles, and our natural sweat/cooling system for sustaining these efforts over long times and distances — cycling is far more efficient at converting those energy expenditures into forward motion.

Walking and running, although we evolved to do them, are intrinsically wasteful motions. The necessity of combatting the force of gravity and only having two contact points with the ground is inherently limiting, while the technological advance of the wheel and axle, and the subsequent development of the bicycle, provides a significant mechanical advantage over what evolution gave us.

It’s enough to make one wonder, “why didn’t evolution give rise to the wheel and axle in any animals?” But that’s a question for a different day!

Send in your Ask Ethan questions to startswithabang at gmail dot com!

The Best In General